Bhutan is one of the few countries in the world that offers a unique combination of tranquility, spirituality, unspoiled culture, natural beauty and adventure. With attention to every detail, we offer you the perfect opportunity to enjoy a magical journey through breathtaking forests and mountain valleys, with gentle day walks, visits to stunning, ancient Dzongs and monasteries and real experiences of Bhutanese rural life.

Escape crowds and busy schedules to enjoy the relaxing spiritual and wellness holiday with the luxurious Amankora Resorts in the foothills of the Himalaya.

Enjoy one of the world’s most spectacular descents as your flight arrives into Paro amidst breathtaking views of the Himalayan peaks.

Upon arrival at the Paro International airport, you will be met and warmly welcomed by your guide from Bhutan-Bhutan Travel and transfer to your hotel in Thimphu.

The drive along a winding road by the Paro Chu (Chu means water or river) downstream to the confluence with the Wang Chu, then turn upstream along the Wang Chu to Thimphu, Bhutan’s scenically located capital city, takes about an hour.

Check into your hotel and relax before strolling through the markets of Thimphu.

Later in the afternoon, visit the Tashichho Dzong, the seat of the national government and the Central Monastic Body which includes the summer residence of the Je Khenpo (Chief Abbot of Bhutan).

Welcome dinner and overnight at the luxurious Amankora Resort in Thimphu.

After breakfast at your hotel, visit the National Memorial Chorten which was built in 1974 to honour the memory of the 3rd King Jigme Dorji Wangchuck, who is remembered as the father of modern Bhutan. Then drive to Kuensel Phodrang Nature Park located about 6kms from Thimphu city.  Walk to The Buddha Dordenma Stutue in Kuenselphodrang, which at 51.5 meters is the world’s tallest Buddha Statue and then hike around the Kuenselphodrang Nature Park.  The park was formally opened as a recreational park in 2011.  The park conserves 943.4 acres of forest area that surrounds the Buddha Dordenma statue.

Then, drive to the National Institute of Zorig Chusum, famous for traditional thangka paintings. Here you will see students at work producing intricate design on cloth. If time permits also visit the Traditional Medicine Institute.

After lunch, visit the Post Office (here you can make your customized stamp) and the Simply Bhutan – A living museum and a photo studio. Later in the afternoon, stroll around the markets of Thimphu.

Dinner and overnight at the luxurious Amankora Resort in Thimphu.

After breakfast, drive through to Punakha, Bhutan’s former capital via Dochula Pass (3,140m).  The pass is a popular location among tourists as it offers a stunning 360-degree panoramic view of Himalayan mountain range. The view is especially scenic on clear, winter days with snowcapped mountains forming a majestic backdrop to the tranquility of the 108 chortens gracing the mountain pass.

Visit the Druk Wangyal Lhakhang (temple), built in honour of His Majesty the fourth king, Jigme Singye Wangchuck.  The pas and future appears to merge in the details of the lhakhang and its structure tells the story of a supreme warrior figure, whose vision pierces the distant future in a fine blend of history and mythology.  For tourists this is ideal location to capture beautiful pictures of Himalayan mountain range during clear, warm days.

After lunch at Chimi Lhakhang Cafeteria, take a leisurely walk for about 25 minutes along the beautiful terraced farmlands and farm houses to visit the Chimi Lhakhang, which was built by Lama Drukpa Kuenley (the Devine Madman) in the 15th century. He subdued the demoness with his “Magical Thunder bolt”. The Temple is also known as “the Temple of Fertility”. If interested, we can arrange a blessing ceremony for the couple for their happy and prosperous married life.

Drive about 7 km from Punakha and cross the suspension bridge over the Mochu River before walking approximately 30-45 minutes to the Khamsum Yuelley Namgyel Chorten (Stupa) which is perched on a strategic ridge overlooking the nearby villages.  It was built under the sponsorship of Her Majesty the Queen Mother Ashi Tshering Yangden Wangchuck to remove evil forces and promote peace, stability and harmony throughout the world.

Dinner and overnight at the luxurious Amankora Resort in Punakha.

After breakfast drive towards Punakha Dzong and later walk across the suspension bridge (about 200m long) through absolutely fresh breeze and fascinating view of Dzong.  Follow the farm houses gradually climbing towards Dompala hills.  The view of Dzong, Pho Chhu, Mo Chhu Rivers and surrounding village is superb amidst chirpine forests.

Visit the impressive Punakha Dzong which was built in 1637. This historic Dzong is situated between Pho Chu (Male River) and Mo Chu (Female River). The Punakha Dzong was the second of Bhutan’s dzongs and until the mid-1950s, it served as the seat of the government. It is also the winter residence of Je-Khenpo and the Central Monastic Body.

Visit the Nunnery in Punakha and explore the small market of Punakha.

Dinner and overnight at the luxurious Amankora Resort in Punakha.

After breakfast, drive to Wangdue to see the beautiful Wangduephodrang Dzong.

Then drive through to Paro via Thimphu.

On the way we will stop over at The Royal Botanical park, also known as the Rhododendron Garden at Lamperi is about one-hour drive towards Thimphu. There are 46 species of plant in this garden. At this park, you can indulge yourself amongst this rich biodiversity amidst the clean air fluttering from the cool broad leaf and mixed conifer forests. You can enjoy walking around through the green lushes and maroon pregnant strawberries, wild and rare flowers in bloom and catch glimpses of runaway mountain birds.

After lunch, drive through to Paro. On the way, visit Simtokha Dzong, the oldest dzong built in 1629 by Zhabdrung Ngawang Namgyel, the founder of Bhutan.

Before checking into your hotel, visit the 7th century old Kyichu Lhakhang (a ten-minute drive from Paro town). The Kyichu Lhakhang is one of the oldest lhakhangs to have been built in Bhutan. It is one of the 108 lhakhangs built by the Tibetan king Songtsen Gampo in the 7th century AD. The king is said to have built 108 lhakhangs in a day throughout the Himalayan regions, of which the Kyichu lhakhang in Paro and the Jampa lhakhang in Bumthang are two. Most of the remaining lhakhangs can be seen in Tibet.

Dinner and overnight at the luxurious Amankora Resort in Paro.

After breakfast enjoy a scenic drive to Chelela pass to see the beautiful Himalayan mountain ranges.

In the afternoon, visit the National Museum of Bhutan (Ta Dzong) built in 1649 as a watchtower by the first Penlop (Governor) of Paro and later converted to the National Museum by the Third king Jigme Dorji Wangchuck in 1968. The museum contains artifacts such as old costumes and battle dresses, together with priceless jewelry and specimens of the kingdom’s unique flora and fauna.

Then visit the Rinpung Dzong (literally meaning “Heap of Jewels”), the centre of civil and religious authority in this valley, built in 1646 by Zhabdrung Ngawang Namgyal. This dzong is the model by which all other dzongs are built.

Dinner and overnight at the luxurious Amankora Resort in Paro.

After breakfast, we will drive you to the trailhead to take a breathtaking and memorable hike through beautiful pine forest. You will stop for light refreshments at the Taktsang cafe before walking to the famous, Taktsang monastery or Tiger’s Nest. The primary Lhakhang or main temple was built around Guru Rimpoche’s meditation cave in 1684 by the Penlop of Paro, Gyalse Tenzin Rabgay. This incredible monastery clings to the edge of a sheer rock cliff that plunges 900m into the valley below. Legend has it that Guru Padmasambhava, the tantric mystic who brought Buddhism to Bhutan in 747 AD, flew here on the back of a flying tiger, Dorji Drolo from Kurtoe Singye Dzong in the east.

After lunch visit the Drugyal Dzong (a ruined fortress), 16 km away from Paro. Although it is now in ruins, this dzong has great historical importance for the people of Bhutan. It was a place where the Bhutanese finally defeated the Tibetan invasion. On a clear day one can view sacred Mt. Jomolhari (Mountain of Goddess).

In the afternoon, you will have an opportunity to explore the beautiful town of Paro.

Farewell dinner and overnight at the luxurious Amankora Resort in Paro.

After breakfast, drive to Paro International Airport where your guide will accompany you to bid you farewell.

There are no reviews yet.

This site uses Akismet to reduce spam. Learn how your comment data is processed. 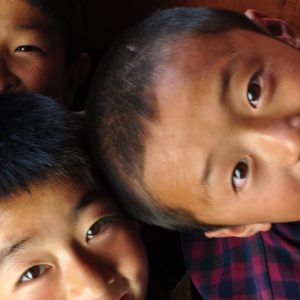 7 days The Quintessential Journey through the Land of Happiness

This tour is designed for travellers with comfor... 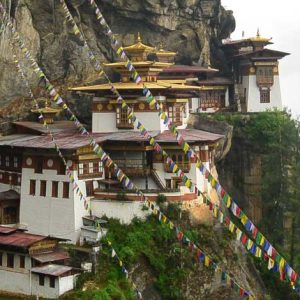 13 days An Exclusive Expedition through the Mystical Dragon Kingdom

This tour is designed for those who are not only...

This special tour is designed for those people who are not only keen to experien...