Festivals or tshechu are held every year in various temples, monasteries and dzongs (fortresses) across Bhutan. It is mainly a religious event celebrated on the 10th day of the month of the Lunar Calendar corresponding to the birthday of Guru Padmasambhava, an 8th century Buddhist teacher.

The Paro Tshechu is held every spring and is one of the most colourful and biggest festivals in the Paro district. It has been held annually since the 17th century when Zhabdrung Ngawang Namgyal, the founder of the state of Bhutan, and Penlop Rigzin Nyingpo initiated the festival together with the consecration of Paro Dzong in 1644. The festival is observed in three parts – the pre-festival rituals on the first day, ceremonies on the second day inside the Paro Dzong, and the main festival at the festival ground for three days. Bhutanese from all walks of life in their finery come to attend the five-day festival.

Early in the morning on the last day of the celebration, the monks display a gigantic thangka (embroidered painting) of the Guru Throngdol inside the dzong. Thongdols are especially impressive examples of Buddhist art and never fail to amaze viewers. They are considered so sacred that simply seeing a Thongdol is said to cleanse the viewer from sin.

Upon arrival at Paro International airport, you will be met by your guide..

After lunch visit Ta Dzong (built in1656 and renovated in 1968), an ancient watchtower, which now houses the National Museum. Below the museum is the Rinpung Dzong (literally meaning “Heap of Jewels”), the centre of civil and religious authority in this valley, built in 1646 by Zhabdrung Ngawang Namgyal.

In the evening, explore the beautiful town of Paro.
Dinner and overnight at your hotel in Paro.

Attend the first two days of the Paro Tshechu festival.  We will also arrange walking tours to suit.

Dinner and overnight at your hotel in Paro.

After breakfast visit Drugyal Dzong (a ruined fortress), 16 km away from Paro. Although it is now in ruins, this dzong has great historical importance for the people of Bhutan. It was a place where the Bhutanese finally defeated the Tibetan invasion. On a clear day one can view sacred Mt. Jomolhari (Mountain of Goddess).

We will then drive you to the trail head to take a breathtaking and memorable hike through beautiful pine forest. You will stop for light refreshments at the Taktsang cafeteria before walking on to the famous, Taktsang monastery or Tiger’s Nest. The primary Lhakhang or main temple was built around Guru Rimpoche’s meditation cave in 1684 by the Penlop of Paro, Gyalse Tenzin Rabgay. This incredible monastery clings to the edge of a sheer rock cliff that plunges 900 m into the valley below. Legend has it that Guru Padmasambhava, the tantric mystic who brought Buddhism to Bhutan in 747 AD, flew here on the back of a flying tiger, Dorji Drolo from Kurtoe Singye Dzong in the east.

After lunch, drive through to Thimphu. The drive is along a winding road by the Paro Chu (Chu means water or river) downstream to the confluence with the Wang Chu, then it turns upstream along the Wang Chu to Thimphu, Bhutan’s scenically located capital city.

In the evening, visit the Tashichho Dzong, the seat of the national government and the Central Monastic Body which includes the summer residence of the Je Khenpo (Chief Abbot of Bhutan).

Dinner and overnight at your hotel in Thimphu.

After breakfast drive to Dodeyna to climb through a beautiful forest track to the Tango Monastery which overlooks a forested valley and other Buddhist retreats high in the mountains.

After lunch, visit the National Memorial Chorten built in honour of Bhutan’s late King Jigme Dorji Wangchuck and drive uphill to the Kuensel Phodrang to see a large statue of Buddha Shakya Muni being built.
In the afternoon, you will also get an opportunity to visit National Institute of Traditional Medicines, National Insitute of Zorig Chusum (School of 13 arts & crafts), Royal Textiles Academy and local handmade paper house.

In the evening explore Thimphu town.
Dinner and overnight at your hotel in Thimphu.

Drive to Punakha via the Dochula Pass (3,140 m). On the way stop to see the spectacular array of chortens, to enjoy the superb view over the snow capped Himalayan Mountains and also to the Gasa Dzong at a distance if the weather is clear.

After lunch, walk  about 25 minutes among beautiful terraced farmlands and farm houses to visit Chimi Lhakhang, which was built by Lama Drukpa Kuenley (the Devine Madman) in the 15th century. He subdued the demoness with his “Magical Thunder bolt”. The Temple is also known as “the Temple of Fertility”.

Then visit Punakha Dzong. The impressive Punakha Dzong lies between two great rivers. The names of the rivers are Pho Chu (Male River) and Mo Chu (Female River). This Dzong serves as the winter residence for the Je Khenpo, Chief Abbot of the Central Monastic Body and also the office of the district administration.

Dinner and overnight at your hotel in Punakha.

After an early breakfast, drive about 7 km from Punakha and cross the suspension bridge over the Mochu River before walking approximately 30-45 minutes to the Khamsum Yuelley Namgyel Chorten (Stupa) which is perched on a strategic ridge overlooking the nearby villages under Kabisa geog. It was built under the sponsorship of Her Majesty the Queen Mother Ashi Tshering Yangden Wangchuck to remove evil forces and promote peace, stability and harmony throughout the world. As the first of its kind in the world to have been constructed, the details and the architectural designs were drawn from scriptures as visualized by Dudjom Lingpa.

After lunch, we will arrange a walking tour along the beautiful Sangaygang – Wangtse walking trail. On the way, you will visit the mini zoo at Motithang to see the Takin, Bhutan’s national animal at close hand.

Drive to Paro in the evening.
Dinner and overnight at your hotel in Paro.

After breakfast at your hotel, drive to Paro International Airport where your guide will accompany you to bid you farewell.

This site uses Akismet to reduce spam. Learn how your comment data is processed. 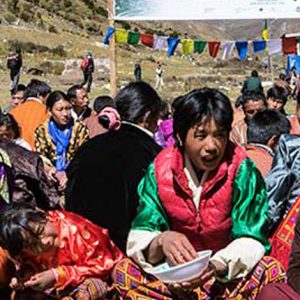 “A community based initiative for the conserva...

A Tshechu is a festival held every year in vario...

The Jambay Lhakhang is one of the oldest temples...

Trashigang is the largest district in the countr...